Chico, a gentleman's motor yacht, was built in 1932 at St. Monans, Fife. A Dunkirk Little Ship, and registered as a National Historic Ship, she is now available for charter on the West Coast of Scotland. There are three double cabins for up to six guests, with separate crew accommodation. Day trips for up to eight people can be booked by arrangement. Please visit our website for more details.

Here we are at the end of January with another lockdown Spring coming up.   I'm preparing Chico for cruising this summer in the expectation that limited social mixing will be allowed, as per last July, however the timing of any relaxation is still uncertain.

Please refer to the website booking calendar for availability if you'd like to book a cruise. Here's a little taste of a summer's day, lying at anchor last year in Loch Drumbuie off the Sound of Mull. 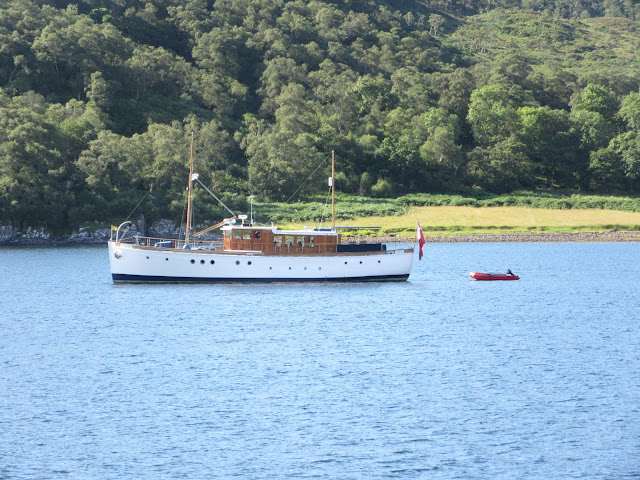 It's my understanding that I must wait for phase 3 of the Scottish Government's lockdown policy before I am able to run cruises, when members of different households may stay under the same roof.

The very earliest that this is likely to happen is mid July, if the next two three weekly reviews are favourable.

Please get in touch to register an interest if you would like to book a cruise and we can see how the situation develops.

Stay safe in the meantime

Gus
Posted by Motor Yacht Chico at 21:51 No comments:

Uncertain times for everyone, everywhere. Unsurprisingly this May's Dunkirk Little Ships event of a fleet crossing from Ramsgate to Dunkirk to celebrate the events of 1940 has been cancelled, with hopes to run it next year instead. Chico was due to take part before returning to the Clyde to act as mothership for an entrant in the Fife Regatta for classic yachts.    https://www.fiferegatta.com/
This event is still on at the time of writing, and provides a good opportunity to see them in action.

We have a number of other cruises booked through the summer which we expect to go ahead, taking individual groups to suitably remote places.
Posted by Motor Yacht Chico at 13:51 1 comment:

Before going into our winter berth in Greenock we spent a couple of nights at anchor in Glenan Bay, Loch Fyne, and were surprised and delighted to be sharing it with a Northern Bottlenose Whale. 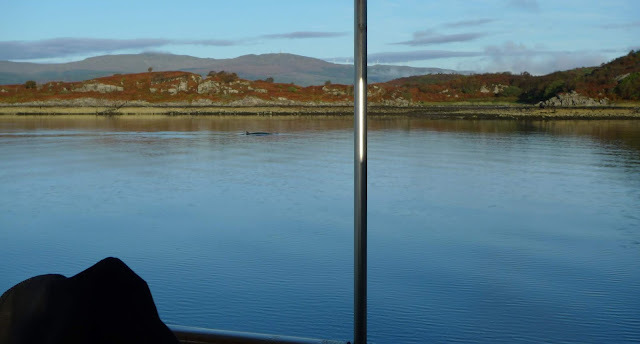 The Northern Bottlenose is a deep water species, usually found off the Continental Shelf in depths of 1000m feeding on squid, so we were concerned as to its health and whether it had become tangled in rope or net, but the next day we could see that it was free of any fouling as we witnessed displays of tail slapping and spectacular breaching. 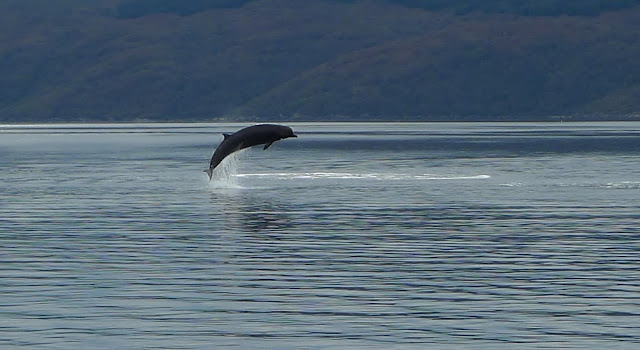 An uncertain postscript is that on October 7th a Northern Bottlenose was sighted off Greenock, tail slapping and apparently 'lost',  it must be the same animal and I fear for its future.

p.s. nothing heard subsequently so it must have made its way back out to deep water.
Posted by Motor Yacht Chico at 15:46 No comments:

When you think of industrial heritage Argyll isn't the first place to spring to mind, but the slate quarries at Easdale and surrounding islands and the iron smelter at Bonawe on Loch Etive led the way two hundred years ago. 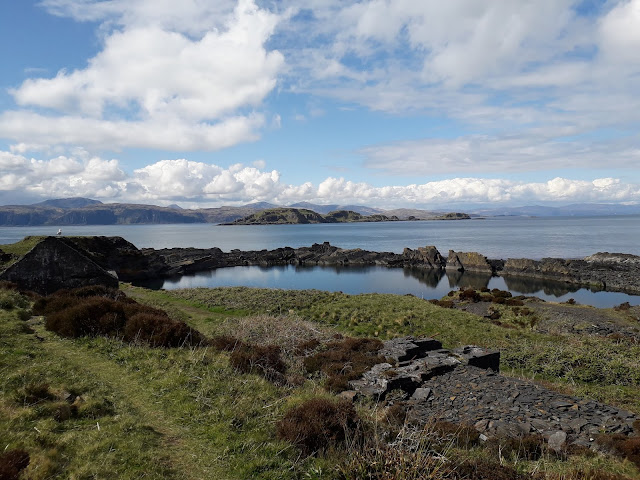 This is one of the flooded slate quarries on Easdale, and everywhere you walk there is debris of dressing chips from the millions of slates exported all over world.

Easdale has found new fame as the host of the World Stone Skimming Championships, held every September, using the endless supply of perfect skimming stones. 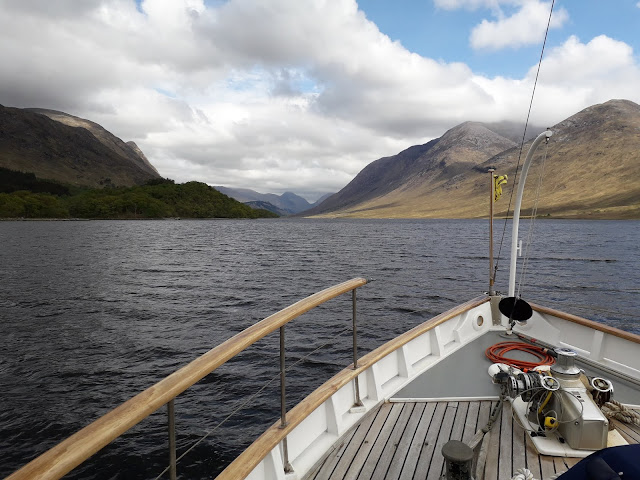 On a trip up to the spectacular head of Loch Etive, it's well worth calling in at the Bonawe Iron Furnace, the well-preserved but not over restored charcoal smelting site, which worked from 1753 to 1876.
Posted by Motor Yacht Chico at 18:06 No comments:

As the 2018 season finishes our thoughts are turning to 2019.  As per the last couple of years we intend to spend the bulk of the summer sailing out of Oban but we have an enquiry for a one way trip from Oban to Greenock, so if anyone fancies a cruise from Greenock back to Oban at the end of June they can look forward to this 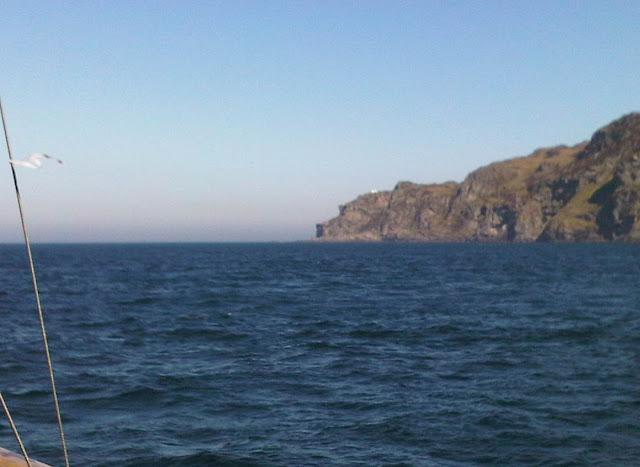 The rock formation known locally as 'the dug's lugs' at the Mull of Kintyre.

To allow for weather conditions this would be a six day cruise, stopping off at some of the following; Arran, Campbeltown, Islay, Gigha, Jura and the lochs on the mainland side of the Sound of Jura.

Bookings taken before the end of December will be at 2018 prices, in this case £1084 per head for 6 people.

Posted by Motor Yacht Chico at 13:35 No comments: 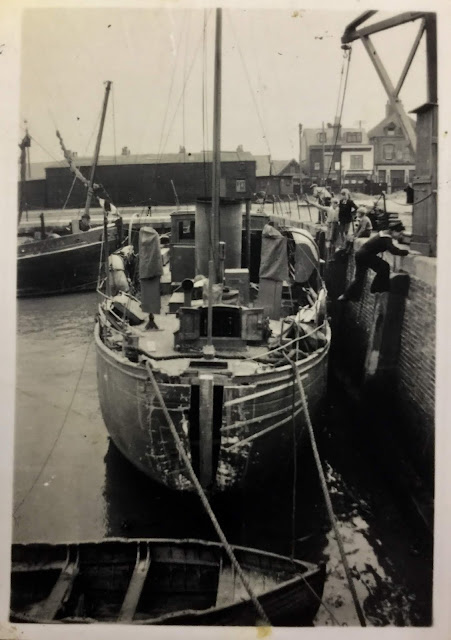 In her war history it's recorded that she suffered some damage to her stern in a collision. This photo shows her in Whitstable Harbour with a new sternpost fitted. Some of the repair is still visible with cracked frames doubled up.
Posted by Motor Yacht Chico at 14:30 No comments: